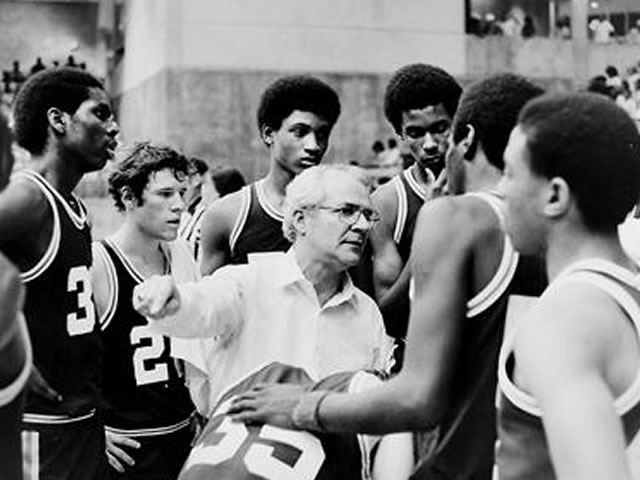 WAXAHACHIE — The Waxahachie Runnin' Indians and Fastbreak Club are quickly
finalizing plans to host the inaugural Dr. David Williams & Coach Jack Aldridge
Celebration Golf Tournament.
The tournament will be held Monday, Sept. 16 at the Waxahachie Country Club, with
all proceeds to benefit the Runnin' Indians basketball program and Alzheimer's
research.
"Our hope is to grow this tournament into something bigger than basketball,"
Waxahachie head boys' basketball coach Greg Gober said. "We want to rekindle old
relationships and remember those good times that made this program so great. And
we are going to do it the right way by honoring two legends of our program."
Gober credited the idea tournament to Lonnie Gaylor, a former Runnin' Indians
head coach and current Lady Indians golf coach, and Rodney Alsup.
Alsup is the current general manager at the Waxahachie Country Club and is a
former team manager for the Runnin' Indians. He was with the program during the
latter years of Aldridge's tenure.
The golf tournament comes seven short months after the Runnin' Indians held
Alzheimer's Research and Awareness Night, which Gober established in a way to
honor Aldridge.
Aldridge, a 2013 Waxahachie ISD Athletics Hall of Fame inductee, passed away due
to complications related to Alzheimer's in 2015 at the age of 76. He finished his
coaching career with over 800 wins, which included a record of 230-83 in
Waxahachie.
The tournament will also honor the life and legacy of Dr. Dave Williams, who joined
Aldridge as an inductee into the 2013 class of the Waxahachie ISD Athletics Hall of
Fame.
Williams operated a family medical practice for 39 years in Waxahachie, while also
serving for several decades as the team physician for Waxahachie ISD Athletics.
The Runnin' Indians formerly held an early-season basketball tournament in his
honor. He passed away in 2012 at the age of 79.
The deadline for a team or player registration is Monday, Sept. 9. The cost is $100
per player, which includes cart, green fee and lunch. There will also be team, hole
and door prizes.
Lunch will be served at 11 a.m. and the tournament will tee off with a 1 p.m. shotgun
start.
The Waxahachie Country Club is located at 1920 W. Highway 287 Business.
In addition to golf, the Fastbreak Club will also host a dinner following the event that
Gober hopes will serve as an annual "pre-homecoming" event for former Runnin'
Indians, coaches, support staff and fans.
There are still sponsorship opportunities available, as well. Sponsorship levels
range from the $1,000 MVP level (4-man team, tee box sponsorship, one-year gym
signage and four Runnin' Indian caps) to the 3-Point level (tee box sponsorship).
There is also a $500 Triple-Double and $250 Slam Dunk sponsorship level.
All sponsors will be recognized on the sponsor board at Mike Turner Gymnasium on
the campus of Waxahachie High School.