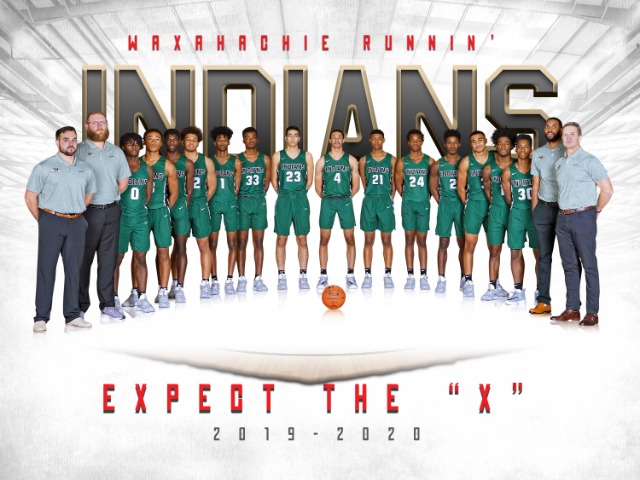 WAXAHACHIE — Though the Waxahachie Runnin’ Indians are headed to the postseason as the, technically, second-best team in District 7-6A, they will undoubtedly be the hottest.

Waxahachie, which entered the week ranked 12th in the TABC 6A poll, outpaced and out-spaced visiting No. 15 (24-9) South Grand Prairie on Tuesday, 67-54, inside Mike Turner Gymnasium. Eight players contributed to the scoring column for the Tribe.

The Runnin’ Indians have now won six consecutive games and all by 12 points or more. Three of those came against TABC top-25 teams.

Following Tuesday’s game, junior guard CJ Noland interlocked the fingers of his outstretched hands as if holding a beach ball and noted it was one of the first times all season that the Tribe had played as a cohesive unit on both sides of the floor.

He was right. And, man, was it fun to watch.

The Runnin’ Indians worked the ball around the perimeter with ease and with very few dribbles against the Warriors’ defense, often sending the ball into the mid-post only to find a cutting teammate on the backside for an easy layup.

What little press applied was broken, too. As was any attempt to beat the Waxahachie defense with a double-screen above the key — senior guard BJ Francis made sure of that, often fighting over the top of two Warrior defenders while Noland or fellow junior Jalen Lake provided the hedge.

Waxahachie did, however, trail after the first quarter of action, 15-10. The Runnin’ Indians then outscored the Warriors 16-7, 20-13 and 21-19 over each of the final three quarters.

As Noland pointed out — Tuesday was team basketball in all of its true beauty.

Noland followed his 29 points on Friday in a road win against Mansfield Summit with a game-high 20 points and eight rebounds in Tuesday’s victory. He was a perfect 3-for-3 from the charity stripe and scored eight points in the fourth quarter to put the game on ice.

Lake added a pair of three-pointers for 15 points and AB Shorter chipped in 13, while Francis scored eight points to go with four assists and AJ Russ had five points.

Cedar Hill (4-10)
Mansfield (3-11)
Mansfield Summit (3-11
Mansfield Lake Ridge (2-12)
UP NEXT
The Runnin’ Indians, who finished second in 7-6A, will now face District 8-6A’s third-place team, Richardson JJ Pearce, in a 6A Region I bi-district championship next Monday or Tuesday at a time and location to be determined.

Richardson JJ Pearce defeated Dallas Skyline, 41-29, on Tuesday to lock into the third seed in District 8-6A, which was won by top-ranked (26-3) Duncanville and also features No. 6 ( 32-3) Richardson.
BACK