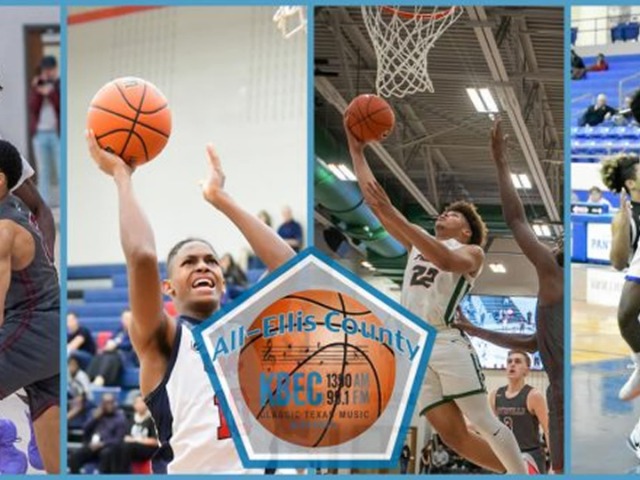 There was no shortage of talent on the hardwood in Ellis County during the 2019-20 season.

When the dust settled and we all had a little time to breathe and reflect, the team at KBEC Sports compiled the 2020 KBEC Sports All-Ellis County boys’ basketball teams.

The teams are broken down into four parts — first- and second-team, honorable mention and superlative honors, and are presented by KBEC 1390AM/99.1FM and Compton’s Carpet Cleaning & Restoration.

The superlatives include Offensive, Defensive, Newcomer, Coach and Team of the Year, as well as the countywide Most Valuable Player and the Mr. Hustle Award.

The All-Ellis County first-team consists of five starters plus one sixth-man, while the second-team afforded a few additional opportunities to include deserving student-athletes.

Miss Monday’s live on-air announcements? Click here to listen to the podcast!
“The Press Box” can be heard weekly on terrestrial radio on 1390AM or 99.1FM or streamed live by clicking on the “LISTEN LIVE” microphone on the top of sports.kbec.com or through the KBEC app. The app is available on Apple and Android devices.

All honorees were selected based on postseason accolades, team success, input from coaches across Ellis County and firsthand observations by the KBEC Sports team.

In total, more than 50 student-athletes were recognized.

Each student-athlete honored will be presented with a commemorative All-EllisCounty certificate, with first- and second-team honorees to receive framed certificates. The individual superlative winners will receive a commemorative bobblehead award.

The awards are sponsored by KBEC 1390AM/99.1FM and Compton’s Carpet Cleaning and Restoration.

On a team loaded with guard play in the stoutest district in Class 6A, if not the state, CJ Noland continuously found a way to take over a game despite the competition.

Those numbers added up to Noland scoring 20.0 PPG in 28 minutes per. He also pulled down 7.3 REB, dished out 2.7 ASST and 2.0 STL per contest. His points, rebounds, steals and 2.6 deflections per game were all team-highs.

Noland was ultimately named the District 7-6A Offensive MVP, as well as selected to the TABC 6A All-Region I team and All-Area second team.

Offensive Player of the Year

A brutal lower leg injury stripped Vernon Johnson of a promising junior season at Life Waxahachie. Following months of recovery, he returned to the court to lead the Mustangs to a 4A Region II championship appearance — all while nearly averaging a double-double.

The 6-foot-3 senior averaged 18.6 PPG, 9.0 REB, 2.5 AST and 2.4 STL per game. He was named to the TABC 4A All-Region III, 4A Region III tournament and All-District 17-4A first teams. He was also named to the Cedar Hill Lion’s Club All-Tournament Team, just a few games returned from his prior leg injury.

Defensive Player of the Year

It’s no secret that Waxahachie head coach Greg Gober and the Runnin’ Indians like to press. Their high-energy defensive efforts require a point guard with an even higher floor-IQ and one that can often lock down the opposing team’s best ballhandler or leading scorer. This year, that floor general was BJ Francis.

One of those guards Francis was tasked with slowing was Grand Prairie’s Jaylin Jackson-Posey (19.5ppg). Francis and company limited the Stephen F. Austin signee and TABC 6A All-State guard to 12 points and 3-of-10 shooting from the field in the Runnin’ Indians’ 68-51 home victory on Feb. 11. It served as just one example of his defensive leadership and poise while running the press en route to posting 1.7 STL, 1.9 deflections and 0.4 charges taken per contest.

Newcomer of the Year

As a freshman on a senior-laden and playoff-experienced team, Kelton Williams had to first establish trust with his teammates and head coach Steven Middleton. After all, this was a Panther team that was just two seasons removed from a 5A state tournament appearance.

By the time the Panthers opened District 15-4A, Williams had impressed enough to earn significant minutes, often trusted to run the offense against some of the best 5A had to offer. He ultimately appeared in all 34 games for the Panthers, who finished the season 24-10 overall after exiting the playoffs in the area round.

The Red Oak Hawks featured a senior-heavy roster this season and five players who averaged double-digit scoring, led by Latrone Turner (15ppg) and Joshua Sasser (12ppg). According to head coach Jason Sasser, though, the heart and soul of that senior class that finished with a 23-12 record and undefeated District 14-5A championship was six-foot guard Keshawn Green.

Sasser told Green that his role would limited role before the season tipped off and, though he obviously wanted more playing time, did not once complain about his minutes and continually pushed teammates to get better every day. “He never quit on the team,” Sasser noted. Green averaged 2.0 points, 1.0 rebound, 0.5 assists, 0.5 steals per game.

Coach of the Year

They eventually bowed out of the 4A postseason in the Region III championship against Houston Yates.

Berumen and the Mustangs ended their season with a 31-10 overall record. He also picked up career win No. 300 in January, with all of those victories coming at Life Waxahachie.

Team of the Year

The Mustangs were bitten by the injury bug early in the season and had to shuffle the starting lineup quite a few times before opening district play. They went on to win the District 17-4A title, marking the program’s fifth outright district championship and secured the 11th trip to the postseason over the past dozen years in the process.

Thanks to a thrilling last-second steal of an in-bound pass and bucket against Palestine in the 4A Region III area championship (52-51), Life Waxahachie eventually advanced to its seventh regional tournament appearance. The Mustangs defeated Silsbee in the 4A Region III semifinals, 75-66, and then fell to Houston Yates, 117-80 in the regional title tilt.

Life Waxahachie ended its season with a 31-10 overall record and finished No. 20 in the TABC 4A regular-season rankings.