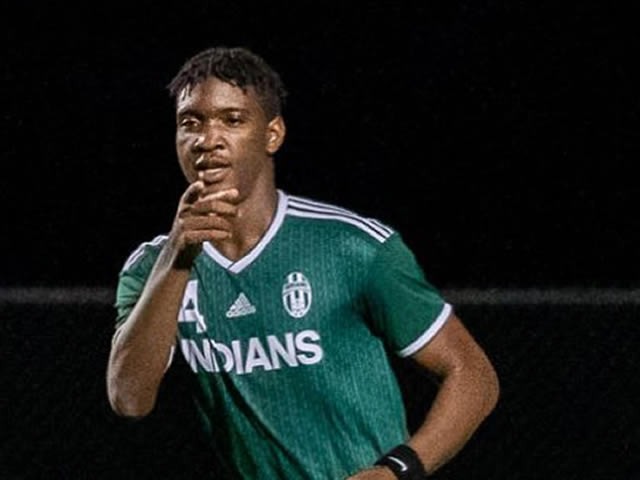 Though Emmanuel Nwonkonko was not the lone senior on the Waxahachie Indians soccer team, he certainly traveled further than any of the other eight to get to Stuart B. Lumpkins Stadium.

All nine, unfortunately, had their senior seasons and postseason dreams dashed Friday afternoon when the UIL announced that the 2019-20 sports season was kaput.

This journey, however, begins Sept. 11, 2001, in Dublin, Ireland, which is where and when Nwonkonko, of Nigerian descent, was born.

For anyone who hasn’t picked up a map recently, Ireland is an island northwest of Germany and France. A fictitious flight from the heart of Dublin to midfield at Lumpkins would take approximately 12 hours and 30 minutes, according to Google Maps.

Roughly eight years after birth and following the passing of his father, the Nwonkonko family relocated from Éire to Mansfield. Nwonkonko explained the change in scenery was just that — an opportunity for something new. It served as a fresh start for his mother, sisters and him following his father’s passing.

“I remember playing soccer there (in Ireland) when I was young,” Nwonkonko told KBEC Sports’ ‘The Press Box’. “[…] The most popular sports are soccer and rugby, and you don’t typically get into rugby when you are young, so soccer was really the only sport that I could get into. After I got into it, I loved it.”

Nwonkonko, (Wah-kon-co) also known by teammates as “E-Man,” attended Mansfield ISD schools from third-grade through eighth before moving to Waxahachie during his freshman summer.

Waxahachie head boys’ soccer coach Seth Riley was ecstatic to learn of a transfer with Irish heritage, as the coach is quite proud of his Irish roots.

Nwonkonko, however, does not fit the typical Irish build.

According to the Irish Times, the average height of an Irish male is just 5-foot-9 inches. The country is also just over 98 percent caucasian.

The Waxahachie senior instead stands a 6-foot-3 and weighs in at over 200 pounds. He’s solid, athletic and every bit fit for the football field rather than the fútbol pitch.

“Ireland is predominantly caucasian people, so when I moved here, it was a lot different,” added the senior when asked for differences between Ireland and Texas. He also noted, of course, the weather.

But football, with the foot and not between the tackles, is his sport — and, boy, is he good at it.

Riley, after a few moments of thought, agreed that Nwonkonko is the largest player he has ever coached, noting he also has the speed and skill to boot.

“A guy with his size and a guy who continued to grow, he had to work a lot to continue to develop his skill set, especially as he continued to grow,” Riley said during a pre-radio show interview. “This sport isn’t necessarily the easiest for big guys to play.”

He added, “We play guys with length a lot, but to have the size, strength and speed that he brings, that’s that trifecta that you don’t normally get.”

Nwonkonko spent the better portion of his freshman and sophomore seasons at Waxahachie on the sub-varsity teams. He did, though, appear in a few varsity matches during his sophomore year, including one infamous outing against Aledo.

That early-season tournament appearance led to the “shorts” game, which featured Nwonkonko having to wear game shorts at least two sizes, if not three sizes, too small. Riley, who still laughs at the scene to this day, explained the team only had one size of extra-large game day shorts, and those were already in use. After all, soccer players aren’t typically as large as Nwonkonko.

Nwonkonko eventually solidified a starting spot on the varsity team as a junior, holding down the spot as a striker who played up top in the Indians’ attack. He went on to record nine goals and two assists over 23 matches.

Before the COVID-19 outbreak put the breaks on the 2019-20 season, Nwonkonko had scored 15 goals and added three assists. Riley noted Nwonkonko could’ve had as many as 30 goals had the ball of bounced the right way.

By the time the season came to its abrupt halt, only one District 7-6A team had secured a playoff spot — Mansfield High — while five were left still competing for three playoff spots with two matches to play.

“Every one of those teams was sitting in a good spot to get in,” Riley said. “We were playing really well and went into the break with a big 3-0 win against someone who beat us the first time around.”

That victory came against Mansfield Summit, who Waxahachie had falled to, 1-nil, earlier in the season. It was also Nwonkonko who provided the hat trick in that now-final match. The Indians were set to close the season against South Grand Prairie and Mansfield.

Thanks to Friday’s decision by the UIL and Governor Greg Abbott, we’ll now never know how the season would’ve played out. Waxahachie officially finished the season with a 12-5-5 overall record and 4-3-5 mark in 7-6A action.

“We were feeling really good about going into those final two games and having a shot [at making the playoffs],” Riley recalled. “But then to have this happen…”

Keep in mind that, at the time of the interview, there was still hope to resume the season. Yet, even with that glimmer of a potential postseason run, Riley said, “it’s not even so much about playing to get in anymore. It’s just about playing to play again.”

“We just want closure,” senior forward Jordan Beechum said. “We just want that one last game with each other.”

Beechum pointed to the Indians winning a district title in 2017 as his standout career moment, as it came while his brother, Tyson, was a senior and the younger was a freshman. The Beechums will be on the same field again next fall, as Jordan is headed to the University of Mary Hardin Baylor.

In addition to Beechum and soon-to-be-committed Nwonkonko, fellow seniors Mark McLachlan (Texas Lutheran) and Joshua Redding (Concordia University) have also decided on their next soccer home.

Redding and both Beechums will play in the American Southwest Conference next season. They remain in disagreement on whether or not Beechum can score a goal on Redding.

“E-Man and his classmates were kind of the epitome of what we have wanted to build here,” Riley said of the 10-member senior class. “They had sustained success and E-Man helped bring a lot of that. And he had to work a lot for that.”

RECRUITMENT ON HOLD?
With the season canceled, the most essential question remaining for Nwonkonko and the other eight Indian seniors was how and if the recruiting trail had changed during the COVID-19-induced stoppage.

According to Riley, the trail had already changed — it’s hotter than ever. He explained college coaches now have the free time to put in additional recruitment efforts that they usually wouldn’t be afforded and have turned toward social media to discover new talent.

Riley has noticed a subtle and encouraging change throughout the colligate ranks of head coaches joining recruitment apps like “Field Level,” which the Indians have used for several years.

“It’s almost like a player’s social media,” explained Riley of the app that the Indian program first began to use in 2015. The app allows student-athletes to post stats, schedules and highlights and provides college programs an opportunity to then follow a player or a program.

The app costs around $20 a month and is not funded by the school district. Riley noted that once Nwonkonko paid for the app, “his stuff shot through the roof.”

Riley then worked with Nwonkonko to develop a strategy that would keep his name relevant among the collegiate recruiters. “If you do it all at once and it’s another three weeks before you load anything else, then they might forget about you. You have to feed them a little at a time.”

Every time a player uploads a video, the colleges that follow him or her are notified.

Every sport can use the app and the team itself doesn’t have to have it. A player can start an account on his or her own.

Nwonkonko currently has 44 schools following him on the Field Level recruiting app. That number is about three times more than any other player in the program since the Indians began using the application in 2015, Riley noted.

Nwonkonko has, however, narrowed down his college home to Hill College and West Virginia Wesleyan. He remains a bit torn between the convenience of proximity to home or an opportunity to fly solo.

But, if it ever came down to choosing a national team to play for — the United States or Ireland — he’d have to go with his birthplace for less-than-obvious reasons.

“I like their jerseys better, for one,” he said with a laugh. “And they play a lot better teams, so it’d be a lot more fun.”

“When I first came [to Waxahachie], I didn’t know much about playing club or anything like that,” added Nwonkonko when asked about Riley’s impact. “He always encouraged me to get better and would work with me on what I needed to get better at. He wouldn’t just throw me out there and not be prepared.

“I’m eternally grateful for that. And the dedication he has shown for the program and continues to show, I mean, a lot of the time he is not at home with his kids or his wife because he is with us and pushing up to get better. We are all grateful for that.”
BACK