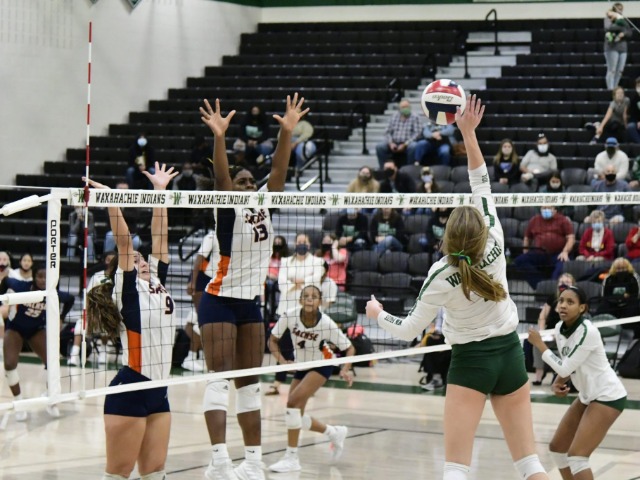 WAXAHACHIE — Troubles along the backline and passing game spelled disaster for the Waxahachie Lady Indians in the 6A volleyball playoffs on Tuesday.

The Lady Indians opened the 6A Region II area championship against Sachse with a 27-25 victory. They then battled to a 21-25 loss in set two.

“In the first set, I thought we passed really well and served really well,” said Waxahachie head volleyball coach Sandy Faussett-Stoops following the program’s 19th consecutive playoff appearance. “I think playing at home helped us a little bit with momentum, too. But then we just let them get a couple of runs on us in the second set and didn’t play as strong in certain areas.”

Waxahachie ultimately found itself trailing 16-7 in the third set, which forced a timeout by Faussett-Stoops. Unfortunately, the (21-2) Sachse Lady Mustangs had all of the momentum and no intentions of relinquishing it.

“They are obviously a very strong team, so we were kind of the underdog going in,” Faussett-Stoops said. “But, we felt good about our prep and, with where we were at in the season, we felt like the team was peaking at just the right time. We were really excited about coming out here and battling against a really strong team.”

She added, “Nerves came into play and we had trouble generating offense from all of our hitting positions so they could sit on us a little bit, especially Kate [Morgan] and Emma [Smithey]. Those two got the majority of our kills.”

Smithey and Morgan recently signed a National Letters of Intent with Division-I Colorado School of Mines and Samford, respectively.

“All in all, though, we lost to a great team and I am proud of the way we competed, just as I always am,” said Faussett-Stoops of the 2020 team. “It’s felt like we have really taken it up a notch in the last two games and I couldn’t be prouder of the way they finished out the year.”

The Lady Indians will ultimately lose two-of-their-top-three outside hitters in Morgan (238 kills) and Smithey (164) but will return Head in 2021 after recording 199 kills with an impressive .249-hitting percentage. Head also led the team with 44 total blocks this season.

One of the brightest spots for the Lady Indians to look toward in 2021 is that both setters, Cavazos (363 assists) and Maddie Fuller (254) are set to return next season.

The Lady Indians opened the season with six consecutive non-district wins before falling in three sets to Wylie. They then finished their District 11-6A slate with a 10-4 record, which placed them third behind (21-2, 14-0) Mansfield and 15-6, 9-3) Mansfield Lake Ridge.

The area-round loss to Sachse on Tuesday dropped Waxahachie to 17-6 on the season.
For those unaware, Sachse is located northeast of Garland and just west of Lake Ray Hubbard.
BACK