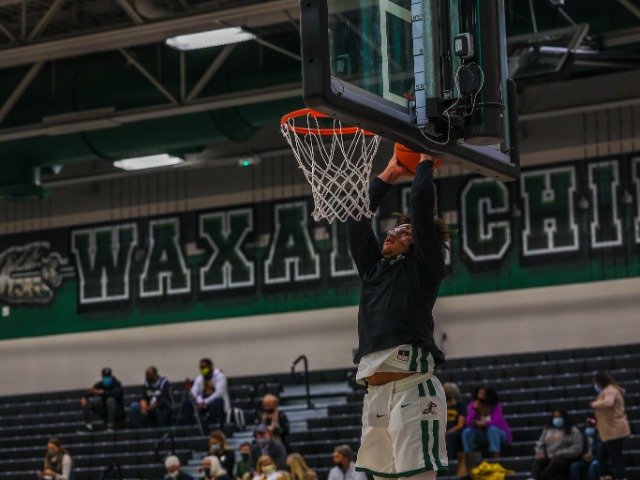 A little program history, 31 points by CJ Noland and a whole lot of second-half defense eventually led the Runnin’ Indians to a comfortable 66-43 district road victory.

Waxahachie improve to 15-2 overall and 8-0 in District 11-6A with the win, which was the program’s 11th consecutive.

Noland, a University of Oklahoma signee, poured in a game-high 31 points for the Tribe. Thirteen of those points came in the second half.

Prince Banks (5) and V’Zarion Roberson (3) rounded out the Waxahachie scoring.

The victory also proved that the apple does not, in fact, fall very far from the coaching tree.

With Waxahachie head boys’ basketball coach Greg Gober quarantined due to COVID-19 tracing, his son, Colten, stepped in as the acting head coach.

The younger Gober is a Colleyville Heritage graduate, where he played for his father and Waxahachie native. He has also served on the Runnin’ Indian staff since the elder took over in 2017.

Despite the win and career-first for Colten, the current Runnin’ Indian head coach noted that it is “MUCH HARDER TO WATCH!” from his home on live-stream than when stalking the sidelines.

Yet, it was almost impossible for anyone who watched the game live to notice the two coaches’ on-court characteristics. Colten looked quite Greg-ish — with the same theatrics — at times during the more intense moments of the road win.

THE GAME
Lake Ridge jumped out to an early 11-7 lead with five minutes and change to play in the first quarter. It didn’t last long, though.

The high-intensity Waxahachie defense forced four consecutive turnovers for a 14-11 lead with just over two minutes remaining in the frame.

The stretch was the start of quite the run — both points and turnovers forced — for the Tribe.

Lake drilled a left-wing trey at the buzzer for a 19-15 Waxahachie lead at the end of the first quarter.

The senior also started the second-quarter scoring with an easy layup off of a Preston Hodge assist.

The Runnin’ Indian lead grew to double-digits, 25-15, when Noland lept and slammed two points home with authority on a fast break. The right-handed slam came with 5:25 to play in the first half.

Lake Ridge eventually hit a three-pointer with 1:12 left in the second quarter to cut the Waxahachie lead back under single digits, 30-21. The Eagles had been outscored 23-10 since the 5:32 mark of the first.

The nine-point Waxahachie lead held as the two district foes headed into the halftime locker room.

Both offenses struggled to find a rhythm out of the break, largely due to the pressure of each team’s press.

Back-to-back three-pointers capped by a corner Noland trey put Waxahachie back on top, 40-28, with 4:12 to play in the third quarter.

Young accounted for the next Runnin’ Indian basket when he got a mid-range jumper from the free-throw line to roll around the rim and in. His bucket came with 2:12 remaining in the third quarter and provided Waxahachie with a 42-30 advantage.

Noland later added a late three-pointer from the right-wing for the 47-32 lead Waxahachie carried into the fourth quarter.

Waxahachie opened the final frame on an 8-0 run, which had the Runnin’ Indians outscoring the Eagles 48-21 since the 5:32 mark of the first quarter.

Lake Ridge finally had a shooter connect on a three-pointer with 5:26 showing on the fourth-quarter clock. The bucket led to a Waxahachie timeout with the Runnin’ Indians leading comfortably, 55-35.

A little later in the quarter, Noland drilled a straightaway three and added two more buckets in the lane for his own personal 7-0 scoring run. His production on the offensive end extended the Waxahachie lead to 65-42 with 2:09 remaining in the game.

Waxahachie won the previous meeting, 83-66, in Cedar Hill. It will be the second game as the acting head coach for Colten Gober.