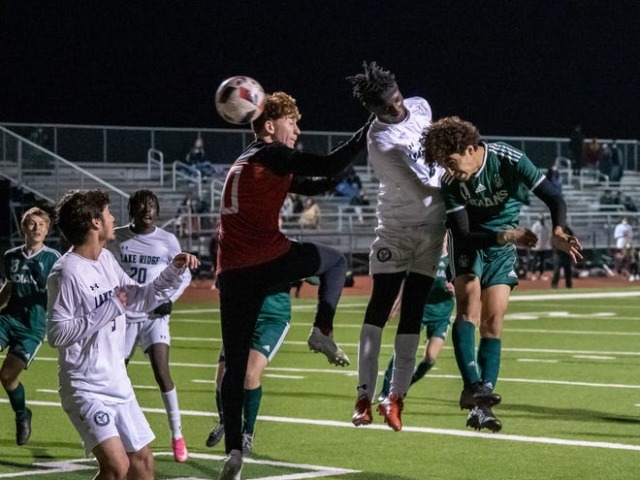 The Waxahachie High School boys’ soccer team recorded the game-winner on a Jesse Garcia header off a corner kick from John Paul Lopez with 20.4 seconds left, and improved to 2-0 in District 11-6A action with a crucial 2-1 victory over Mansfield Lake Ridge on Friday night.

The Indians surrendered a first-half goal to Lake Ridge sophomore Jax Turley off a Donovan Hawkins assist, and trailed 1-0 at intermission. However, the Tribe equalized in the second half on a penalty kick with 12:20 left, and then they pulled out the full points at the death on the corner header, sending the WHS sideline into bedlam.

WHS freshman goalkeeper Frederico Palafox was under intense pressure in the first half, but made four crucial saves on shots on goal to keep the match in hand. In the second half, the Indians made defensive adjustments that turned the tide in their favor.

The Indians (5-5, 2-0) were scheduled to travel to Cedar Hill on Tuesday night. They will hit the road to Duncanville on Friday and will return home to face Mansfield High on Tuesday. Both matches will kick off at 7:30 p.m.
BACK