NO. 2 DUNCANVILLE SURVIVES FURIOUS RALLY BY NO. 1 WAXAHACHIE TO WIN 6A REGION II TITLE 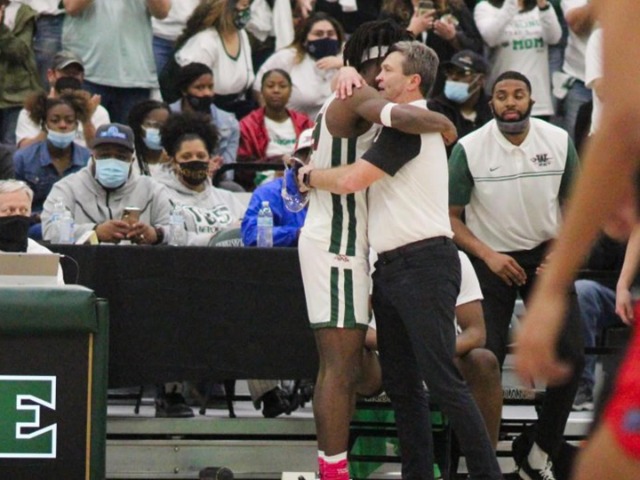 There would be no last-second magic for the top-ranked Waxahachie Runnin’ Indians against No. 2 Duncanville in Tuesday’s 6A Region II championship.

The game was ultimately decided in the first half, which saw the Runnin’ Indians struggle to get shots to fall. Duncanville was cooking early and carried a commanding 41-24 lead into the halftime locker room.

But the Panthers are postseason tested and their playoff experience showed. Duncanville won the 2019 6A state championship and was the favorite to repeat in 2020, only to have the tournament canceled due to COVID-19.

CJ Noland led all scorers with 30 points for the Runnin’ Indians and fueled Waxahachie’s second-half comeback. The Tribe outscored Duncanville 41-29 after halftime.

Damon Nicholas Jr. led the Panthers with 20 points, while Juan Reyna had 15 and Ronald Holland and Zhuric Phelps each added 10.

The Panthers’ lone loss this season came against the Runnin’ Indians in overtime on Jan. 9 (88-85). Young hit the game-winning three-pointer in the final seconds.

Waxahachie trailed by as many as 12 points — twice — during that first meeting. The Runnin’ Indians also trailed by 10 points at the half (42-32) and the start of the fourth quarter (60-50) in the matchup.

As for the Runnin’ Indians, their only other two losses on the season came against iSchool of Lewisville (87-83) and McKinney (57-47).

Waxahachie has yet to win a basketball state championship since the 1982-83 season (4A).

FIRST HALF
Duncanville scored the game’s opening basket, but back-to-back fastbreak finishes for Noland and Young put the Runnin’ Indians on top early, 4-2. It was quite apparent that Gober had the team focused on the defensive effort and pressure in the half-court, which led to the easy baskets.

Unfortunately, Duncanville put together a 9-0 run to take an 11-4 lead as the first-quarter clock dipped under four minutes.

A pair of Panther turnovers and a steady stroke by Prince Banks at the charity stripe eventually halted the run, as Waxahachie was able to cut the deficit to three, 11-8, with 2:40 to play in the first.

Montez Young Jr. then brought the Runnin’ Indian faithful to their feet with a thunderous two-handed jam in transition — over not one but two Panther defenders. The dunk came with 2:04 to play in the opening frame and had Waxahachie within one, 11-10.

The first quarter ended on a 6-2 Duncanville run, leaving the Runnin’ Indians trailing 17-12.

V’Zarion Roberson drilled a trey from the left elbow to put the Runnin’ Indians on the board in the second quarter. Banks followed suit from the left corner a few possessions later.

The Banks bucket pulled Waxahachie within five, 23-18, with just under six minutes to play in the first half.

Duncanville scored the next six points — four off of turnovers — to force a Waxahachie timeout with 3:41 showing on the second-quarter clock.

Another run of sloppy ball-handling and errant passes allowed Duncanville to build a hefty double-digit lead, 36-20, with under two minutes to play.

A nifty over-the-shoulder and behind-the-head assist from Young to Jh’Marques Head temporarily stopped the bleeding. Roberson got a tough floater in the lane to fall on the Runnin’ Indians’ next possession to cut the deficit to a dozen, 36-24, with 1:24 remaining in the first half.

Duncanville added five points to close out the half with a 41-24 advantage.

Waxahachie was just 2-of-16 from behind the arc in the first half.

SECOND HALF
Noland, who came out of the locker room with an intense focus, scored first in the second half. The senior bodied a foul in the lane and then got the free throw to go for an and-one.

Roberson followed with a triple from the left corner. A whole lot of hustle on the defensive end then resulted in a Young layup.

And, suddenly, the Runnin’ Indians had the momentum, trailing 41-32 with 6:11 to play in the third quarter. The 8-0 run also forced the first Duncanville timeout of the evening.

The scoring run did not stop there, though. Roberson drilled another three, Noland laid home two points and converted on a pair of free throws.

Suddenly, the Tribe was within a single basket, 41-39, as the third-quarter clock ran under four minutes.

The Panthers wouldn’t be shut out in the quarter and managed to reel off a quick 6-2 run for a 47-42 advantage. Waxahachie had several opportunities to retake the lead during the stretch.

A DJ Pigford three with 1:40 was the final basket for the Runnin’ Indians during their impressive third quarter.

Waxahachie outscored Duncanville 20-12 in the third to cut the Panther lead to nine, 53-44.

Duncanville opened the fourth quarter with a pair of buckets in the lane to reclaim their double-digit lead, 57-44.

The lead was still in double figures, 59-47, as the game turned toward the final five minutes. It only grew, 61-47, after the next 90 seconds of game action.

Duncanville eventually closed out the win, 70-65.