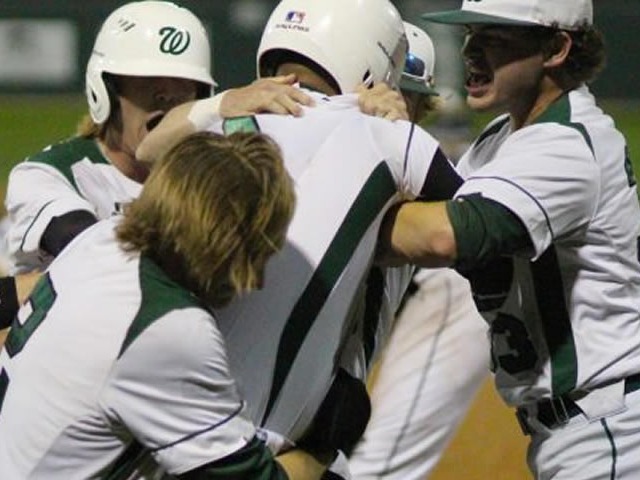 A botched double play and heads-up baserunning resulted in a walk-off win for the Waxahachie Indians on Tuesday against Mansfield Lake Ridge.

The victory on the Tribe’s Senior Night also clinched a berth into the Class 6A baseball playoffs. Fittingly enough, a pair of seniors — Xavien Thompson and Anthony Mata — rallied the bats at the bottom of the seventh inning for the 5-4 win.

“This was super special for our seniors,” junior Jared Thomas said. “Not even to mention that this might be their last game at Richards Park, but for the entire team to give it 100% and for those two do it in that moment, I don’t know, I’m speechless right now.”

Thomas (4-2, 1.07 ERA) was, for the most part, sharp on the bump for the Indians. He struck out eight, walked three and scattered seven hits over 6.2 innings of work.

He did, however, have to work out of jams in the first and third innings with an Eagle on third base. Senior right fielder Casey Kelly also gunned down a base runner headed to third base in the top of the second. Mata applied the tag with time to spare after Kelly’s one-hop into the bag and on the money.

Thomas also drove in the game’s first run when he singled home Kelly in the bottom of the third inning. Four pitches later, Mata singled to plate Jacob Cruz and Thomas for a 3-0 Waxahachie lead.

Mata added a third RBI in the bottom of the fifth inning when he singled Thompson home. The RBI was the 31st of the season for the senior third baseman, who is now hitting .280 for the club.

Waxahachie carried that 4-0 lead into the top of the sixth inning, which saw Thomas’ luck of stranding runners on base come to an end.

Two walks and a hit-by-pitch in the top of the seventh-inning then chased Thomas from the game as the junior hit the 110-pitch limit.

Kelly entered the game in relief with one out and the bases full of Eagles. He worked quickly to get ahead of the Eagle batter, only to give up a two-run double on a 1-1 count.

The gapper tied the game at 4-all. Kelly (7-1, 0.95 ERA) retired the next Lake Ridge hitter on a lineout to Cruz in left field.

Three weeks ago, a four-run rally late in the game would’ve spelled disaster for the Tribe — just as it did against Duncanville, Mansfield and Midway in the first round of 11-6A play.

But Waxahachie has now won four of its past five ballgames, using newfound energy and confidence to do so.

“The difference tonight was that we knew locking up this playoff spot wouldn’t be easy,” Thomas said. “Lake Ridge is really good. But we had energy from the very first pitch to the last pitch. We had guys hustling and executing. It’s a lot easier to win when guys are executing and excited to play.”

Thompson worked a five-pitch walk to lead off the bottom of the seventh inning. He then advanced to second on Cruz’s groundout to second base.

After the Eagles elected to intentionally walk Thomas, Mata dug into the right-handed batter’s box.

Mata fouled off a pair of pitches down the third baseline and quickly found himself in a 1-2 hole. He then dribbled one to the Lake Ridge second baseman and beat the throw that pulled the first baseman off the bag. The potential double-play ball was bobbled, dropped and then hurried toward the general area of first base.

All the while, Thompson put on the jets from second and scored easily following a head-first slide into home for the walk-off win.

Mata, who finished 2-for-4 with 3 RBIs, was ultimately named the Waxahachie Glass Corporation Player of the Game for his efforts in sending the Indians back to the 6A playoffs.

UP NEXT
Waxahachie returns to action Friday on the road against Waco Midway. The first pitch is slated for 7 p.m.

The Indians are now 22-8 on the season and currently hold the third spot in the District 11-6A standings with a 9-4 mark. Waco Midway and Mansfield are tied atop the district at 10-3, while Duncanville sits one game back of Waxahachie at 8-5. Lake Ridge is now out of the playoff picture with a 7-6 mark.

KBEC 1390AM/99.1FM will continue to carry Waxahachie baseball action on-air and online.
BACK