‘THEY ARE GOING TO BE THERE’: ANTHONY MATA, INDIANS BATTLE TRAGEDY TO REACH POSTSEASON 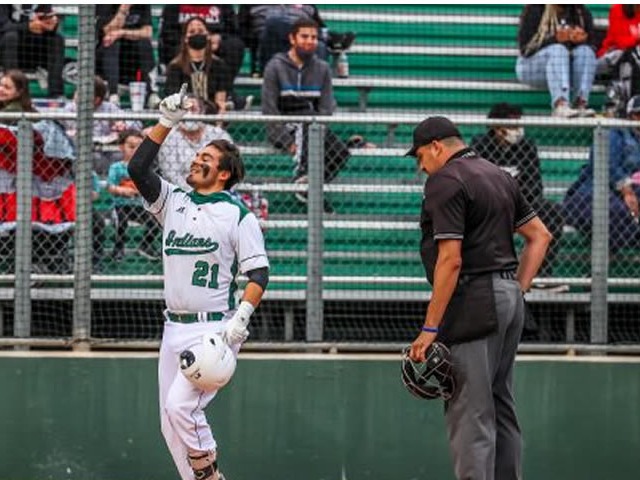 Anthony Mata tossed the barrel around an outside offspeed pitch to send it into the third base coach’s box during the Waxahachie Indians’ regular-season home finale.

The senior was battling, already stuck in a 2-1 count with the Indians tied with visiting Mansfield Lake Ridge, 4-4. It was the bottom-of-the-seventh inning in what, at that time, was thought to be the final game at historic Paul Richards Park for the Tribe’s Class of 2021.

Mata dug back in at the plate on Senior Night with a runner — in this case, fellow senior Xavien Thompson — standing ready to go wheels up on second base. He gently tapped his bat on the 17-inch wide piece of rubber and exhaled.

****
Mata is a member of a group of seniors from around the country who lost nearly their entire junior campaign due to the COVID-19 pandemic in 2020. They also watched as much of their summer select-ball plans were dashed by continued restrictions.

The pandemic and gradual return to normal would not mark the end of this group’s adversities, though. Not even close. This class of Indians was to be emotionally tested — twice more.

The first tragic shock came on a rainy Sept. 21.

Dreary weather had the varsity group instructed to meet at Stuart B. Lumpkins Stadium to condition and utilize the weight room. The ongoing rain and field conditions were not at all suitable for the team to practice on the turf playing surface on the campus of Waxahachie High School, let alone Richards Park’s natural field.

The first tragedy then struck, when projected starting shortstop Austin Elbert was involved in a fatal two-car accident on U.S. Highway 287 at approximately 1:51 p.m. Elbert, a senior, had departed the high school campus for the afternoon practice.

The fall baseball season was slated to begin that afternoon. It was supposed to be the first taste of a “new normal” for Mata and the Indians. That restart was ultimately delayed a week, though their return to Paul Richards Park was anything but “normal.” Each pitch, ground ball, swing and run scored was “the first” since losing a teammate and brother.

A tribute to Elbert now sits inside the front gates in the form of a green-and-white metal bench. It serves as a daily reminder that we are not granted another out.

Mata said in the days and weeks that followed Elbert’s passing, he made sure to “have side conversations with teammates.”

As you’ll come to find out, Mata is a young man of few words. He often, especially early on during the fall season, would sit silently inside the Indians’ dugout. From his propped-up position on the bench back, Mata remained present and engaged. But it was apparent to anyone who walked by that he preferred the solidarity.

The fall season eventually came and went, and the calendar turned to 2021. Heartbreak again struck just two weeks into the new year.

****
“Honestly, from what I remember, Anthony started playing ball before he was five years old, and my dad had never missed a tournament,” recalled Michael Mata, Anthony’s older brother, during a National Signing Day ceremony at the high school on Feb. 3. “He had never missed a game. What he wanted more than anything was to see Anthony sign and continue his career.”

And Mata did just that — he inked a national letter of intent that afternoon with perennial junior college power Navarro College.

The celebration was somber, however. Twenty days prior, their father, Pete Mata, 54, had passed away from COVID-19 complications.

Pete battled the respiratory illness for the better part of two weeks before passing on Jan. 14. Hospital restrictions allowed the family very little time at Pete’s bedside to support the dedication, supportive and rock of a father, grandfather and friend.

To date, the Texas Department of State Health Services has reported 310 COVID-19-related deaths in Ellis County. There had been 225 fatalities attributed to the virus in the county as of Jan. 13.

“It’s hard with my dad not being here,” said Mata, who stood with both hands in his pockets shortly after the signing while near the back of the stage. As he spoke, those filing out of the auditorium were quick to give him a quick congratulatory pat on the shoulder or handshake. “But I know he is looking down on us, and I know he is watching.”

Mata also assured that he never doubted the decision to go the JUCO route. He noted he’d leaned heavily on his family, as well as coaches Tracy Wood (Waxahachie) and Heath Autrey (Corsicana) while mulling his collegiate offers.

“[Signing] meant a lot to me and my dad,” the senior third baseman said. “I know [my dad] loved seeing me sign that letter.”

His elder brother, Michael, again reiterated that the signing day was a point of healing for the family.

“Family is our rock,” said Michael as he thanked so many family members for being in attendance. “Our dad was the rock of our family, and it’s sad that he’s not here, but he’s watching us. We are all going to stick together, and that is what my dad taught us.”

“[…] Like I told him the day that our dad passed away, this is your moment and you have to use this to push you harder. This is going to make him a man and it is going to make him strong. And it was the same thing that I told when Austin passed. It’s an unfortunate part of life, but you have to keep going. You can’t stop right there. You have to do it for them now.”
BACK