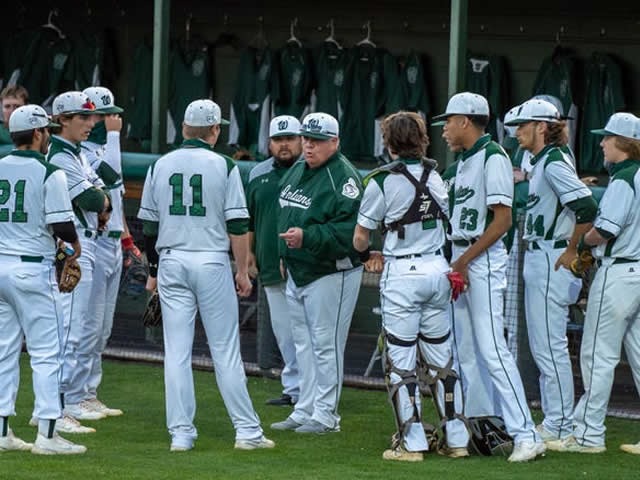 An ever-crowded District 11-6A playoff picture became crystal clear just as the rain clouds took over Monday night in Hewitt.

The game, initially rained out on Friday, was the final of the regular season for the two teams. And, though the Indians and (15-13-1, 10-4) Midway Panthers ended the season with identical 11-6A records, it was a pregame coin flip that ultimately decided the final playoff seeding.

The Panthers won that flip, giving them the second seed and the Indians the third. Waxahachie did, however, have to win the game to avoid a coin flip or playoff seeding game against fourth-place (16-13, 9-5) Duncanville.

The Mansfield Tigers won this season’s District 11-6A championship with a 17-10-1 overall record and 11-3 mark in league play.

Jared Thomas was once again stellar for the Tribe, playing his way to the Waxahachie Glass Corporation Player of the Game honor.

The junior finished the night 2-for-4 at the plate with an RBI and run scored.

Thomas also earned the win on the mound Monday for the Tribe, improving his season record to 5-2 with a 0.98 ERA over 55.1 IP. He struck out six Panthers, walked four and scattered four hits over 5.0 IP. The lone run he allowed was unearned.

Anthony Mata closed out the game by striking out three and allowing three runs (2 ER) on two hits over two complete innings. The six-out performance resulted in Mata’s first save on the season.

Waxahachie collected just three hits during the victory but did benefit from seven walks and one Midway error. The Tribe scored all six runs in a merry-go-round style second inning.

Midway plated three runs in the bottom of the seventh inning to make things interesting — and make those in attendance get a little damp on the way to their vehicles.

UP NEXT
The Indians will now face the (18-12-1, 10-4) Harker Heights Knights in a 6A Region II bi-district championship.

The Knights finished second in District 12-6A, which was won by the (23-3-1, 13-1) Belton Tigers. Killeen Ellison and Copperas Cove rounded out that district’s playoff picture.

Game one of the three-game series is set for 7 p.m. Friday at Harker Heights. Game two will be played at 2 p.m. Saturday at Paul Richards Park in Waxahachie, with game three to follow (if necessary).