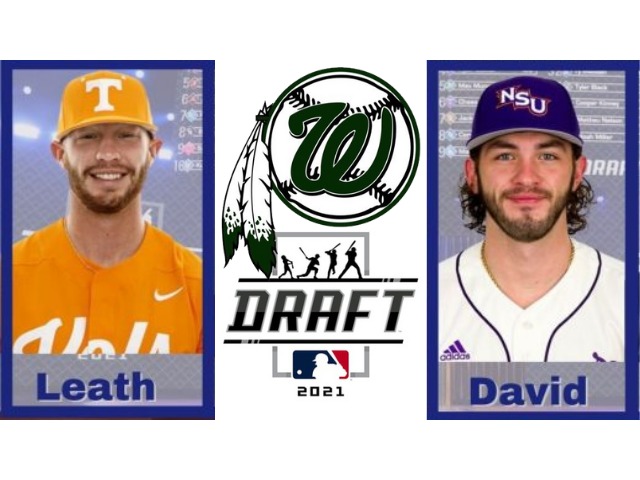 Starting pitchers Levi David and Jackson Leath — both 22 years old and born just six days apart — very likely marked the first pair of Waxahachie graduates to ever be drafted in the same year. KBEC Sports was still working to confirm the occurrence as of publication.

Levi David once captured the 5A state championship in the 50-meter freestyle as a senior at Waxahachie High School. He has, however, made quite the career with two feet firmly planted 60 feet, 6 inches from home plate.

The work David had put in over the past four years paid off Monday when he was selected in the 9th round (262nd overall) by the New York Mets.

The 2017 Waxahachie graduate previously attended McLennan Community College, a Division-I junior college located in Waco. An early injury during his freshman season followed by a redshirt in year two led to a bumpy start to David’s collegiate career. He eventually found his way to Northwestern State as a relief arm.

David found success during the COVID-shortened 2020 season, finishing his first campaign with the Demons after making five relief appearances. He then played for the Acadiana Cane Cutters in the Texas Collegiate League, which he credited with exposing him to a “professional” baseball-type atmosphere.

The 6-foot-5 righty returned to Natchitoches, Louisiana and found fantastic success as a starting pitcher this past season.

During an interview Monday evening on KBEC’s The Press Box, David credited his stellar season to a vastly improved curveball, which paired well with his 92-95 MPH fastball. The numbers backed his claim up, too, as opposing hitters went just 5-for-98 against the pitch. He recorded 80 of his 104 strikeouts with the offspeed pitch, as well.

“It is so special to see Levi get picked up by the Mets,” head coach Bobby Barbier told NSU Athletics of the 53rd Demon drafted all-time. “He has worked so hard for this day and deserves every bit of it.”

MLB.com beat writers labeled David as the “most intriguing” selection for the Mets during the 2021 draft.

Jackson Leath began his collegiate career at Blinn College, a junior college located just outside of College Station. He started 10 games as a sophomore, striking out 61 over 61.1 IP and on his way to a 5-2 record.

Leath then carried his strikeout artistry to Knoxville, Tennessee and the campus of the University of Tennessee.

He recorded 29 strikeouts over 18.2IP with a perfect 4-0 record and impressive 1.45 ERA during the COVID-shortened 2020 season. The effort led to Leath being named a 2021 preseason second-team All-American by Baseball America. He was also listed as the 36th-best prospect by D1Baseball.com’s Top 2021 College MLB Draft SEC Prospects list.

Leath continued his dominant tenure in a Volunteer uniform into his second appearance in 2021. The senior had recorded 6.1 scoreless innings with eight strikeouts and having scattered four hits when he suffered a torn hamstring during the first inning of his second appearance.

Leath detailed the injury, recovery and more with KBEC Sports during a recent airing of The Press Box.

According to Tennessee Athletics, Leath is the fourth Volunteer to be selected by the Rangers. He joins Julio Borbon (2007), R.A. Dickey (1996) and Chris Kelley (1992).