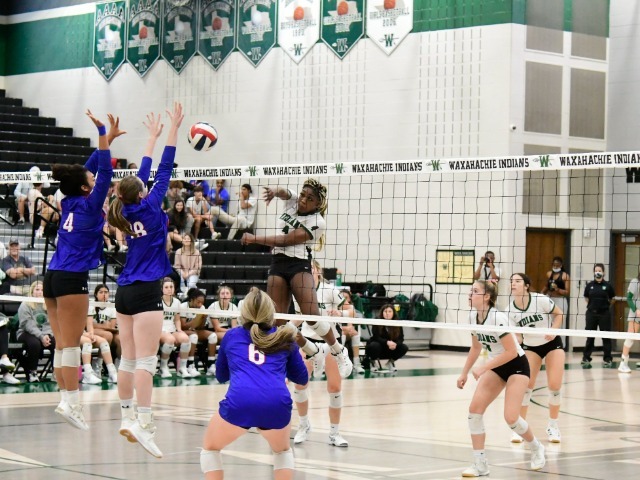 A tradition two decades in the making will soon continue for the Waxahachie Lady Indian volleyball team.

It was just one month ago when (20-19, 6-4) Midway stole a four-set win from the Lady Indians. Head coach Sandy Faussett-Stoops said her team has “shown great improvement” since that road defeat. The Lady Indians have also made a few tweaks to their offensive strategy to quicken the attack.

“We have made some huge strides since the last time we played Midway,” Faussett-Stoops told KBEC Sports following Tuesday’s win. “We’ve really started to quicken our offense. Defensively, we have remained solid. But, our offense, that has been our focus, and I was really pleased with what I saw today.”

Faussett-Stoops would still like to see her front line, led by senior Jh’kyah Head, get more touches on the opposing attack to help Brooklyn Baskin, Abby Fuller, Maddie Fuller, Robinson and others on the backline.

The Lady Indians have now won four consecutive matches following a four-set road loss to (28-15, 10-0) Mansfield on Sept. 28. Those two will square off again Friday, Oct. 22 in Waxahachie for a district tilt that could but shouldn’t have much, if any, playoff implications on the line — so long as the Lady Indians take care of business against Duncanville (Friday, Oct. 15) and Mansfield Lake Ridge (Tuesday, Oct. 19).

With a win against either Duncanville or Lake Ridge or a loss by either one, the Lady Indians will officially clinch an 11-6A playoff berth. Both teams are currently 4-6 in district play, which has them two games back of fourth-place Midway. Lake Ridge faces district-leading Mansfield on Friday, so it’s all but inevitable that one of the two scenarios will play out.

The currently-penciled-in trip to the postseason will mark the 20th consecutive occasion for the Faussett-Stoops led Waxahachie side. The head coach is in her 21st year with the Lady Indians and not a single member of this year’s team was even born when the playoff streak began.

Waxahachie will lock into the 11-6A second seed with three wins and a combination of two wins and a DeSoto loss.

Waxahachie and (27-6-3) DeSoto close out the regular season Tuesday, Oct. 26. The Lady Indians won the first matchup in four sets in DeSoto on Oct. 1.

UP NEXT
Waxahachie continues its push toward the playoffs Friday on the road against (23-16-1, 4-6) Duncanville). The first serve is slated for 5:30 p.m
BACK