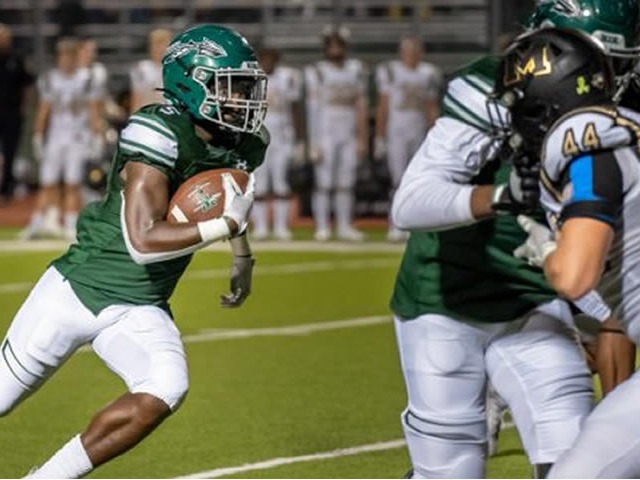 WAXAHACHIE — Homecoming proved to be quite the celebration for the Waxahachie Indians on the gridiron in a must-win game.

The Indians absolutely dominated the visiting Mansfield Tigers in the second half for a 43-25 win.

The District 11-6A victory came in front of several thousand alumni and supporters at Stuart B. Lumpkins and all-but-locked Waxahachie (5-3, 3-2) into one of four 11-6A playoff spots. The Indians now need either one win over their final two games (Waco High, DeSoto) or one (4-4, 2-3) Mansfield loss to mathematically clinch a second-consecutive 6A playoff berth.

Jayden Becks was sensational for the Indians on Friday. The junior rushed 25 times for a career-high 162 yards and two touchdowns to pace an Indian offense that outgained Mansfield 356 total yards to 246.

After the game, Becks was quick to credit and thank his offensive line for their play. He then passed praise to the defensive unit.

“The best part about tonight was winning with my brothers,” Becks said. “We knew we had to win this game to get into the playoffs. This was a big game and it was very fun.”

He added, “With us being down [in the second half], I knew I had to run hard. I had to do anything I could to help the team. […] The offensive line played really good and stepped up, too. Our starting tackle, Brent Martin, went down and the next man stepped up, and they played hard. We all thank them for the win.”

Becks and Iverson Young have formed a two-headed rushing attack for the Indians all season. Young, a sophomore transfer from Red Oak, was injured in week eight against Duncanville. He touched the football four times Friday for 17 yards before reaggravating his injury.

Becks entered Friday with 94 carries for 424 yards on the season, while Young led the team with 671 yards and five scores on 130 attempts (5.2YPC).

“I just knew, with him being banged up, that he could go down at any time, so I knew I
had to step up and play a bigger role for the team,” Becks added. “[…] Our defense has been really unbelievable, man. Going into the season, I just knew that we only needed to help them a little bit because they were going to be good. And they are.”

The Indian defense, especially the front seven, suffocated the Tigers.

Outside of a 75-yard James Johnson touchdown run late in the fourth quarter, Mansfield had just 74 total yards of offense post-first quarter.

The long touchdown run came on the first play following Roderick Hartsfield Jr.’s 8-yard quarterback keeper with under three minutes to play in the fourth quarter. Most of the Indian sideline was still celebrating — and rightfully so — as Johnson broke down the right sideline as the game was already well in hand.

HOW IT HAPPENED
Mansfield took full advantage of the advantageous field position early in Friday’s tilt.

Sergio Kennedy and Tyrell Croom scored from 42 and 2 yards out, respectively, to put the Tigers up, 14-0. The second score came with 3:28 to play in the first quarter and after Mansfield blocked a Waxahachie punt.

The Indians began to find a little momentum on the ensuing drive, utilizing a much more uptempo offense. And, as the dismal first quarter ended, Waxahachie picked up a first down to move inside the Mansfield red zone.

The Tigers had outgained the Tribe 98 total yards to 67 in the opening quarter — with 72 of those coming on the ground.

That yardage deficit didn’t last much longer, though.

Hartsfield (13-15, 119, TD) took the first snap of the second quarter 18 yards for a touchdown. He read the Tiger defensive end perfectly on a zone-read to the left, cut back against the grain and scooted to paydirt.

The touchdown came with 11:55 to play in the first quarter and cut the Tiger lead to 14-7.

It was followed by a 30-yard kickoff return to put the Tigers near midfield, continuing a trend of poor special teams play to start the game for the Indians.

A holding penalty, combo sack by Jermy Jackson and Brendan White and stellar open-field tackle by La’Markus “Speedbump” Reed forced a quick three-and-out. Mansfield then downed the ensuing punt at the Indian 2-yard line — because, of course.

Mansfield went on to add a 38-yard field goal following a Hartsfield interception. The quarterback overthrew his receiver on an 8-yard slant route from the right-side numbers.

Becks and the Indian offense did respond on the ensuing drive when the junior running back broke through the Mansfield line for a 3-yard touchdown. Jesse Garfias split the uprights to cut the Mansfield lead to 17-14, which held through the halftime buzzer.

Waxahachie outgained Mansfield 204 total yards to 129, though the Tigers started near midfield or deeper thanks to those special teams miscues and less-than-ideal kickoff coverage.

It took two offensive possessions, but Waxahachie eventually set the tone in the second half.

Hartsfield and Jaelyn Davis-Robinson hooked up for a touchdown “pass” on a jet sweep to cap a lengthy dive with 6:10 to play in the third quarter. The Indian quarterback flipped the football forward as Robinson crossed just behind the center. He then scampered around the left end and broke across the goal line 12 yards later for a 21-17 Waxahachie lead.

Mansfield took over and began to piece together an impressive drive of its own. Facing a fourth-and-2, it appeared the Indians had tackled the Tiger ball carrier short of the first down. The line judge even spotted the ball short and signaled for the chains to flip direction.

He was then overruled by the head referee, which gave Mansfield a first down in Waxahachie territory with 2:18 to play in the third quarter.

The Tigers made the most of the extra life, too. They promptly marched deep into Waxahachie territory and eventually lined up for a 42-yard field goal attempt as the clock ran toward 30 seconds to play in the third quarter.

A pair of Indians blocked said field goal attempt, which allowed Calvin Simpson to scoop and score for a 28-17 Waxahachie lead with 29 seconds to play in the third quarter. Simpson had to outrun Nicholas Lucero, who is surprisingly speedy for a kicker and nearly ran down the Indian wide receiver toward the end of his 55-yard return.

Two possessions later, Mansfield blocked a second Waxahachie punt with 8:27 to play in the fourth quarter. The ball rolled out of the back of the end zone for a safety and cut the Indian lead to 28-19.

The Indian defense, which had consistently lived in the Tiger backfield all night, finally got through on the ensuing Mansfield drive. Waxahachie forced and recovered a Kennedy fumble with under seven minutes to play in the fourth. The recovery set up the Tribe offense on the Tigers’ 30-yard line with an opportunity to seal the win.

And seal they did.

Hartsfield capped the short drive with an 8-yard touchdown run behind the right guard with just under three minutes to play in the game. The score — his second on the ground — put the Indians on top, 43-19.

Johnson added a 75-yard Mansfield touchdown on the ensuing Tiger snap to cut the lead to 43-25. The Indians and their faithful were already in full celebration mode by that point and continued as the clock hit zeros.

UP NEXT
Waxahachie will have its opportunity to mathematically clinch a second-consecutive 11-6A playoff berth Friday in Waco.

Kickoff is slated for 7 p.m. at Waco ISD Stadium.

As the Indians begin to look toward next Friday and the playoff horizon, Becks was adamant that the team needs to continue focusing on consistency.

“We can’t have guys miss practice or anything and we need to keep going and working hard,” Becks explained. “We can’t take any days off. Coach [Shane Tolleson] has told us since day one that we have a really good football team and that we could do big things. We just have to continue to execute.”