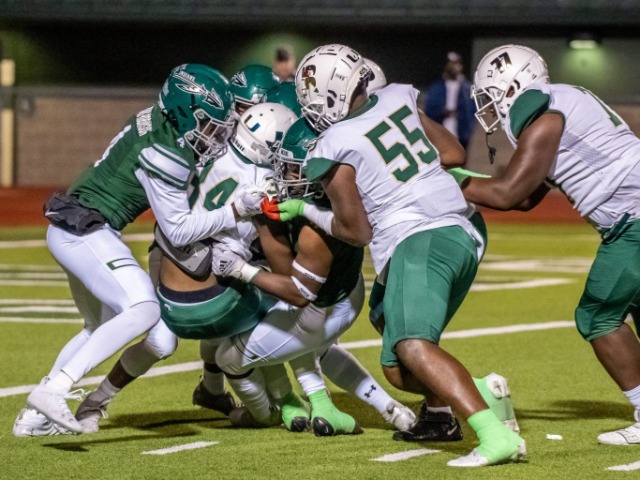 State-ranked DeSoto needed a goal-line stand to avoid an upset in Thursday’s regular-season finale against Waxahachie.

The Eagles made their stand for a 31-25 victory in yet another statement game for the Indians.

After all, the computers at Dave Campbell’s Texas Football predicted that (8-2, 6-1) DeSoto would run away with the District 11-6A road victory by 24 points at Stuart B. Lumpkins Stadium in Waxahachie.

Yet, there (6-4, 4-3) Waxahachie was facing fourth-and-goal from the 3-yard line with a chance to tie the game at 31 as the clock ran toward 30 seconds to play.

Junior quarterback Roderick Hartsfield Jr. faked to the running back, rolled to his right and was immediately met by a pair of Eagles. His heave, which amounted to a no-look prayer toward the back of the end zone, fell to the turf.

Several Eagles then stood between the hashes and took a moment to grandstand toward the Indian sideline after the stop. They, along with their teammates, cheerleaders and coaches, then thought the win was monumental enough to rush the midfield “W” following the final buzzer.

DeSoto head coach Claude Mathis was among those stomping around at midfield. He stood proudly, grinning with hands raised toward the Indians lined single file for postgame handshakes.

The unruly Eagles were quite clearly taunting the Indians. The bait didn’t catch and the group was ultimately escorted off the field by Waxahachie and DeSoto Police.

This is the same DeSoto team that has watched 17 graduates sign with Division-I football programs since 2018. Waxahachie has had four (Jerreth Sterns, 2018; LaDarius Henderson, 2019; Demani Richardson, 2019; Josh Sterns, 2020) over that span.

Most of these Eagles had outscored the Indians 97-18 over the previous two seasons.

It is also the same DeSoto program that was without four key players — all with multiple DI offers — ahead of Thursday’s contest against the 101st-ranked Indians (as ranked by DCTF).

Multiple sources confirmed to KBEC Sports that none of the four missing Eagles were arrested, only briefly detained and charged with criminal trespass after unlawfully entering Waxahachie High School and its campus during school hours Thursday. The nature of their uninvited visit to campus is still unclear and unconfirmed.

Under Texas Penal Code Section 30.05, the Class B misdemeanor is applicable after a person “enters or remains on or in property of another without effective consent” or “when the person had notice that the entry was forbidden or received notice to depart but failed to do so.”

247Sports.com confirmed to KBEC Sports prior to kickoff that standout four-star wide receiver Johntay Cook II was among the inactives due to “off-the-field issues.” Cook, a junior, currently holds offers from Alabama, Ohio State, Oklahoma, Texas and Texas A&M, among a host of others. He has 24-catches for 514 yards and team-high 13 touchdowns this season.

Senior wideout Stephon Johnson Jr. — an Oregon commit with 35 grabs for 337 yards and six scores — was also among the key Eagle players not dressed out Thursday. He was joined by juniors Dahlyn Jones (11-165, TD) and Caimon Mathis. Jones, a wideout, holds offers from Arkansas and Kansas, while Mathis — the head coach’s son and starting defensive back — has reportedly been offered by Kansas, Marshal and Mississippi State.

The three receivers could’ve certainly been utilized Thursday, as the Waxahachie secondary limited quarterback Matt Allen to 10-of-19 passing for 143 yards and no touchdowns.

Prior to Thursday, Allen had been held below 200 yards four times this season, with three of those coming during blowout wins against North Crowley, Cedar Hill and Mansfield Lake Ridge.

Mathis would’ve certainly proved beneficial to the Eagle defense, too, as Hartsfield had one of the best nights of his career through the air.

Hartsfield completed 13-of-his-26 passes to seven different receivers for 229 yards and one 38-yard touchdown pass to Iverson Young with 8:03 to play in the first quarter.

The touchdown was set up by the Indians downing a punt at the Eagles’ 1-yard line with 10:02 to play in the first quarter. DeSoto picked up one first down and then punted four plays later — for 14 whole yards to the Eagles’ 31-yard line.

Hartsfield then connected with Young on a slant across the middle for an 8-0 Waxahachie lead, following a successful two-point conversion.

On the ensuing Indian drive, Hartsfield again connected across the middle, this time with Keith Abney Jr. The speedy wideout raced 64 yards before diving toward the goal line, only to be marked short at the DeSoto 1-yard line.

Two snaps later, Jayden Becks ran behind the heavy line for an easy touchdown. The score and following extra-point kick had the Indians on top, 15-7, with 2:05 to play in the first quarter.

Jesse Garfias later added a 30-yard field goal for the Indians for an 18-7 lead with 8:32 remaining in the first half.

DeSoto closed the second quarter with a plethora of quick screens toward the Eagle sideline and several gashing runs between the tackles. The Eagles ran 25 plays to the Indians 6 over the final eight minutes and scored twice to pull within 18-17 at the half.

The stout Indian defense forced a three-and-out on the ensuing DeSoto possession, which resulted in a negative-14-yard punt after the snap rolled past the Eagle punter.

Jayden Becks scored six plays later from three yards out to pull the Indians within a single score, 31-25, with 5:12 to play.

A fourth Eagle punt then led to the final Indian drive, which we already know ended at the goal line.

Both teams were playoff-bound before stepping onto the turf Thursday evening at Stuart B. Lumpkins Stadium.

One celebrated like they’d won their first playoff game. And it must be hard to always be Duncanville’s little brother.

Waxahachie, on the other hand, will turn its focus to Temple in the 6A Division II bi-district round. The details of that game, a rematch of the 2020 6A DII bi-district championship, have not yet been set.
BACK