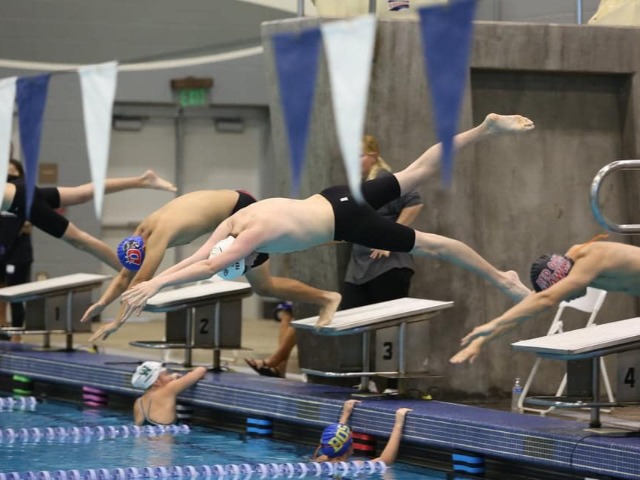 Stepping onto the blocks on Saturday at the Hebron Invitational was a culmination of hard work, dedication, and a dream for Cade Ferry. For 20 laps he kept his chosen pace and never wavered. His counter, Luke Tran, watched the splits after each lap and made sure to give Cade the correct signals so he knew he was on track to break the record that had stood since 2002. For years, Waxahachie High School swimmers have been chasing that record, but no one had been able to beat it, until Saturday. With a time of 5:29.82, Cade beat Michael Kelseys’ time of 5:34.73 by almost 5 seconds.

Senior, Cade Ferry, joined the high school swim team as a freshman with many years of club swim experience. That experience immediately made him a leader and stand out on the swim team. Before he swam his record breaking 500, he won the 200 freestyle about an hour before the longest distance race in high school swimming, the 500. Amazingly enough, after breaking the record, Cade joined his 3 teammates and sprinted another 50 yards in the 200 freestyle relay leading them to another 1st place finish. He ended the meet in the last event of the day by swimming another 100 yard sprint on the 400 freestyle relay team, and again earning a 1st place finish.

Cade’s performance helped lead the WHS Boys’ team to their first team victory since moving up to UIL 6A standing. The WHS Swim Team has 3 more regular season meets left before the district meet in January and perhaps Cade will challenge his own record again.