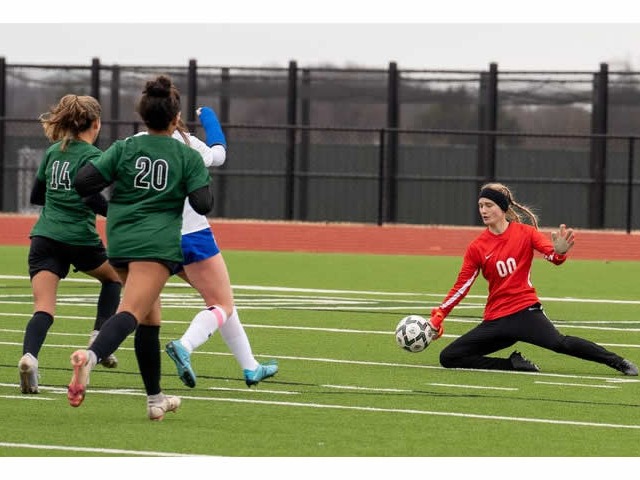 The Lady Indians closed out the Joey Rodriguez Memorial Showcase at the Midkiff Athletic Complex on Friday and Saturday with two more shutout victories, beating Carrollton R.L. Turner, 4-0, on Friday and Fort Worth Trimble Tech, 3-0, on Saturday.

The senior scoring tandem of Kaydence Ramirez and Peyton Renfro each recorded a brace in Friday’s win over R.L. Turner. For the North Texas-bound Renfro, it was her first two high school goals in almost two years after suffering a torn ACL in the 2021 preseason.

The Lady Indians finished with 13 shots on goal and found the net twice in each half. Ramirez added two assists to Renfro, and Sam Hernandez added an assist to Ramirez.


On Saturday against Trimble Tech, it was more of the same, as Epps and the defensive crew led by Amiyah Carter, Emilee Jones, Jaya Johnson and others kept the opposition off the scoreboard again.

The Lady Indians had opened their season on Thursday afternoon with a 1-0 victory against Denton Ryan.

The annual Highway 287 Showcase was renamed this year to honor the late Joey Rodriguez, the Arlington Sam Houston soccer coach and president of the Texas Association of Soccer Coaches who passed away on Oct. 17 at the age of 44 after a nearly 2-month battle with COVID-19. Last Friday would have been his 45th birthday.

The Lady Indians (3-0) will compete in the Aledo Moritz Kia Tournament beginning on Thursday against host team Aledo at noon. They will also take on Fort Worth Arlington Heights at 6 p.m. on Friday, with bracket games set for Saturday.
BACK